skip to main | skip to sidebar

My blog is in desperate need of a make-over. Meanwhile, I have no idea what just happened to my blog links.
Posted by Hydra at 14:28 4 comments:

One day, not too far away 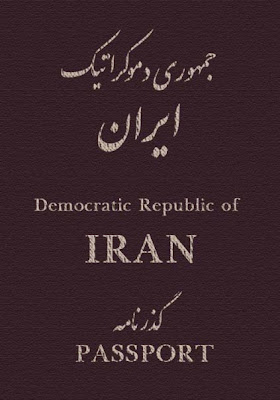 The video of Sohrab Aerabi's funeral was released today. During the ceremony his mother stood up and shouted emotionally in protest to the death of her son. This video illustrates quite vividly our nation's suffering in the face of brutality. Please share this video, so the world may hear her repressed voice.
Posted by Hydra at 23:48 No comments:

Yesterday, it was announced on various blogs and news websites that Sohrab Aerabi had died in Evin prison. Sohrab was arrested on 20th of June during the protests against the massive election frauds in Iran. For days, his family did not know where Sohrab was, and whether he was still alive. Later, the family learned that he was jailed in the infamous and feared Evin prison.

Sohrab's mother had voiced her concern about his son's life. A few days later the family received a message that their son had died in prison and that they must come to claim his body.

Sohrab was 19 years old, and was preparing for the university entrance exams this summer.
Posted by Hydra at 11:41 No comments: 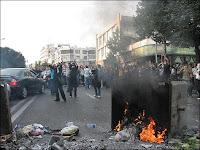 1. The number of the protesters clearly overwhelmed the government forces.
2. Despite some set backs, the decentralized nature of the protests made the security forces feel frustrated, confused and powerless.
3. Protests at national level seem to work much better than planned demonstrations on specific locations in the capital; Tehran needs people in other cities to get involved.
4. BBC was quite disappointing in covering the protests. Were they affected by the nonsense of the IR?
5. Where are Mousavi and Karoubi? Their status as leaders of the movement is not clear anymore to a lot of people.
6. Tehran, Tabriz, Esfahan, and Shiraz are the heart of the protests.
7. Today, people sent a strong message to the government that their movement is still alive and kicking, despite the reign of terror in last few weeks.
8. We WON!
Posted by Hydra at 01:17 1 comment:

I had always defended Aljazeera when my friends complained that its style was like the moslim version of the Fox News. A new, independent and critical media was a welcome change in the Middle East, a region where state news agencies had dominated the media for years.

However, I was disillusioned in the days following the controversial Iranian elections. It started with a video, which characterized the protesters as vandals "who had caused considerable damage to public properties". Next, the Aljazeera Youtube channel featured an interview with a former American security advisor, who articulated great doubt that the US government could do anything to influence the protests. Nonetheless, the video was entitled "US has intelligence agents working in Iran", which in fact echoes the propaganda that is announced almost daily by the Iranian state TV.

Overall, Aljazeera has done little to provide a balanced view of the events in Iran. In the last weeks the news agency has focused mostly on the political aspects of the events, which has been a good excuse not to mention the Basij's brutal attacks, the arrest of hundreds of reformers, students and journalists, as well as the false and absurd "confessions" of people on state TV who were supposedly possessed by foreign media, especially BBC and VOA. This has been the reason why Aljazeera is currently the only foreign news agency who can report all around Tehran. If you are not convinced, watch this ridiculous report to see it for yourself.

Is it the blind anti-Americanism of Aljazeera that explains its royalty to Ahmadinejad? Or is its love for Hamas and Hezbollah, which have been generously funded during the Ahmadinejad administration?

I will Boycott Aljazeera!
Posted by Hydra at 23:19 No comments:

Iranians encouraged to spy on their families by the state TV

Although this is an old video (posted last year on Youtube), I wouldn't be surprised to see more of these adds in the weeks and months to come.

Hydra
My name is Hydra.